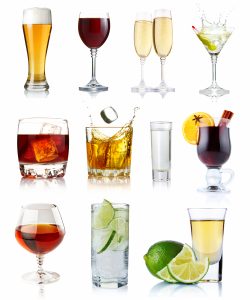 In its Report on Carcinogens, the National Toxicology Program of the US Department of Health and Human Services lists consumption of alcoholic beverages as a known human carcinogen.

The research shows a distinct correlation between the amount of alcohol a person drinks, and a higher risk of developing an alcohol-associated cancer. Based on a study by Andrew T. Kunzmann, Helen G. Coleman, Wen-Yi Huang, Sonja I. Berndt – The association of lifetime alcohol use with mortality and cancer risk in older adults: A cohort study – PLOS Medicine. Published: June 19, 2018, cancer incidence (excluding nonmelanoma skin cancer), and combined risk of cancer and death across categories of self-reported average lifetime alcohol intakes, with adjustment for potential confounders was calculated. During 836,740 person-years of follow-up (median 8.9 years), 9,599 deaths and 12,763 primary cancers occurred. Positive linear associations were observed between lifetime alcohol consumption and cancer-related mortality and total cancer incidence. In November of 2017, The American Society of Clinical Oncology (ASCO) released a statement about alcohol and cancer risk stating: research has proven that alcohol is connected to more than 5% of cancer diagnoses around the world, including several types of head and neck cancers, esophageal cancer, liver cancer, breast cancer, and colon cancer.
Production of acetaldehyde during alcohol metabolism, which through its interactions with proteins and lipids also can lead to radical formation and cell damage. This may lead to alcohol–induced oxidative stress. Oxidative stress is defined as an imbalance between production of free radicals and reactive metabolites, “oxidants” or reactive oxygen species (ROS), and their elimination by protective mechanisms, referred to as antioxidants. Under a sustained environmental stress, ROS are produced over a long time, therefore significant damage can occur to cell structure and functions. This may induce somatic mutations and neoplastic transformation; cancer initiation and progression has been linked to oxidative stress by increasing DNA mutations or inducing DNA damage, genome instability, and cell proliferation

The risk of cancer associated with alcohol consumption is higher in tissues in closest contact on ingestion of alcohol, such as the oral cavity, pharynx and esophagus. This is explained by the fact that ethanol is a proven mutagen and in addition, metabolite of ethanol (acetaldehyde) produced in the liver is highly carcinogenic, thus explaining both local (mouth, throat, esophageal cancers) as well as distant (skin, liver, breast) cancers. Recent evidence suggests that the cytotoxic effect of ethanol on the cells lining the oral cavity, pharynx and esophagus activates the division of the stem cells located in deeper layers of the mucosa to replace the dead cells. Every time stem cells divide, they become exposed to unavoidable errors associated with cell division and become highly vulnerable to the genotoxic activity of DNA-damaging agents (e.g., acetaldehyde and tobacco carcinogens). A study found that “the ADH1C*1 allele and genotype ADH1C*1/1 were significantly more frequent in patients with alcohol-related cancers.

Alcohol may cause damage to body tissues by acting as an irritant, especially in the mouth and throat. Cells that are damaged may try to repair themselves, which could lead to DNA changes in the cells that can be a step toward cancer. In the colon and rectum, bacteria can convert alcohol into large amounts of acetaldehyde; a chemical that has been shown to cause cancer in lab animals. Alcohol damages the liver, leading to inflammation and scarring. As liver cells try to repair the damage, they can end up with mistakes in their DNA, which could lead to cancer .Alcohol can act as a solvent, helping other harmful chemicals, such as those in tobacco smoke, enter the cells lining the upper digestive tract more easily. This could explain why smoking and drinking is much more likely to cause cancers in the mouth or throat than either one by itself. Alcohol use can lower the body’s ability to absorb folate from foods (cells in the body need Folate to stay healthy). This is a bigger issue in heavy drinkers who often do not get enough nutrients, folate included, in their diet. Low folate levels may play a role in the risk of breast and colorectal cancers. Alcohol can raise body levels of estrogen (a hormone important in the growth and development of breast tissue) and can affect a woman’s risk of breast cancer.

Click on link to  learn about the Cancer Exercise Training Institute’s Gold-standard CES Advanced Qualification. Up-level your credentials, increase your client base, and change lives!